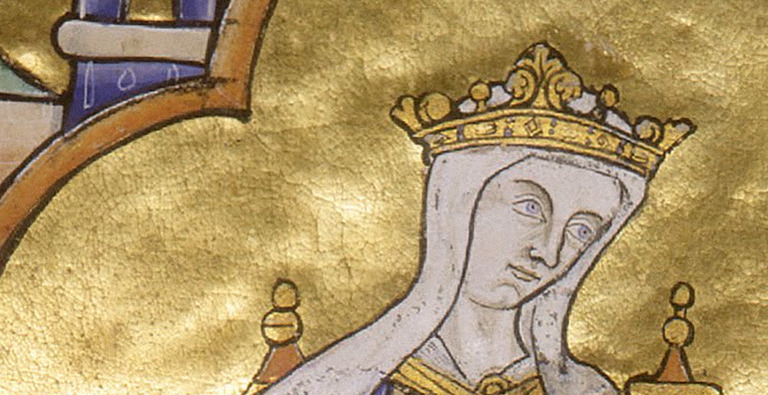 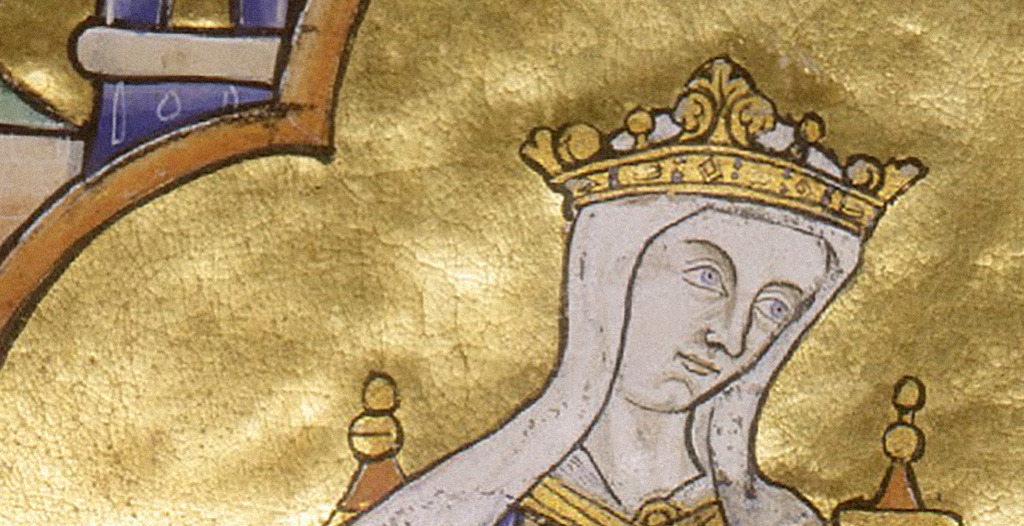 the granddaughter of Henry II of England and Eleanor of Aquitaine.

Wife to King Louis VIII of France, and mother of the sainted Louis IX. Blanche was offered in marriage to Philip II of France’s eldest son, Louis (the future Louis VIII), as part of the Treaty of Le Goulet between Philip and John I of England (Blanche’s uncle).

In 1200, Blanche crossed from her homeland over the Pyrenees and into France to be married, accompanied by her grandmother, Eleanor of Aquitaine, then almost 80 years old. Blanche gave birth to her first child, Blanche, in 1205, and went on to bear twelve more children, of which five would survive to adulthood. Louis’ father Philip would go on to reign for many more years, allowing Louis and Blanche the opportunity to build a strong relationship between themselves and their children, as well as develop a court with its own culture.

During the English barons’ rebellion of 1216–16, Blanche and her husband boldly attempted to seize the English throne, claiming her right as granddaughter of Henry II. They successfully invaded England in 1216 with the support of the English barons, at one point holding much of southeast England including London. Blanche managed to gain financial support for the war by basing herself in the northeastern territories and working closely with officials to raise an army and fleet from local revenues. Her father-in-law, Philip II, refused to provide financial support, and it was said that Blanche threatened to put up her children as hostages if he would not assist them. Unfortunately, after the death of King John the barons withdrew their support in favor of John’s nine-year-old son Henry, later crowned as Henry III. In 1217, the French fleets were defeated, leaving Louis to retreat and make peace. When Philip II died in 1223, Louis and Blanche, after twenty-three years of strengthening familial ties and developing a highly cultured yet intensely religious court milieu, were crowned King and Queen of France.

Blanche’s overt role in her son’s life and reign also created some tension within the royal household, specifically between Blanche and her daughter-in-law, Margaret of Provence. Margaret and Louis IX were married in 1234, a union organized by Blanche herself. The new queen was lauded for her beauty and charm, and contemporary accounts suggest that the marriage was a loving one. Nevertheless, as queen mother Blanche is described as a less-than-sympathetic mother-in-law. Blanche is also cited alongside Thibaut of Champagne as co-author of the debate poem “Dame, merci, une riens vous demant.”

Demonstrating her courage and skill as both a ruler and diplomat, Blanche herself accompanied the French forces to meet with the baron armies of Thibaut of Champagne and Henri of Bar, and instead of fighting she negotiated marriage alliances with the barons; when these unions did not occur the rebel armies regrouped. Thibaut of Champagne, however, abandoned the rebellion and allied himself with the queen regent. With his help and that of the papal legate to France, Romanus, Blanche successfully raised an army and marched on the rebel barons. Gradually she subdued the rebellion and curtailed Henry III’s attempts to gain more French territory. She resolved tensions with the southern nobles of France by signing the Treaty of Paris in 1229 with her cousin Raymond VII, Count of Toulouse, resulting in the marriage of her son, Alphonse, to his heir Joanna. The treaty also resulted in the ending of the Albigensian Crusade.

Blanche’s tenure as queen consort was brief, as Louis VIII died in 1226, leaving her regent and guardian to their children. As regent (both during her son’s minority and during his absence on crusade 1248–52), Blanche took an active part in the affairs of the kingdom.

One incident in particular painted her as unsympathetic and stubborn: in 1229, student riots in Paris resulted in the damage of property of the Church, and Blanche sided against the students, demanding retribution. In the resulting violence, two students were killed. In response, many of the scholars of the University of Paris announced that they were leaving the city and dispersed to their homes and other centers of scholarship, ending all academic activity at the university. This strike lasted two years, only ending after Pope Gregory IX issued a papal bull declaring the university under papal patronage and thus independent of local authority. Through it all Blanche refused to give in, and this confrontation demonstrated Blanche’s stubbornness when she believed in the rightness of her position.

Blanche was a notable political figure during the thirteenth century and did much to secure and unify the French territories through wars and marital alliances.

Blanche maintained a great deal of influence over her son throughout the rest of her life and held an independent position on many issues. She provided protection to the Jewish population, at times present at debates over the Talmud despite rising anti-Semitism in France. In 1239, she mandated a fair hearing for the Jews, presiding over a formal dispute in the king’s court. When Louis IX ordered that the Talmud and other Jewish books be burned, Blanche assured Rabbi Yehiel of Paris, who was representing the Jews, that he and his property were under her protection. Famed for her piety, she supported the Cistercian order and founded two abbeys: Notre-Dame-la-Royale (in 1236) in Maubuisson, and Notre-Dame-du-Lys (in 1244) near Melun.

Not all appreciated Blanche’s administration, however. Her enemies called her “Dame Hersent” (the she-wolf from the Roman de Renart) and accused her of improper relations with Thibaut of Champagne, whose influence in the king’s court had been increasing, and the papal legate Romanus.

While Thibaut is said to have dedicated songs to Blanche, there is no evidence that rumors of an affair between the two was any more than the usual charges leveled upon foreign women in public.