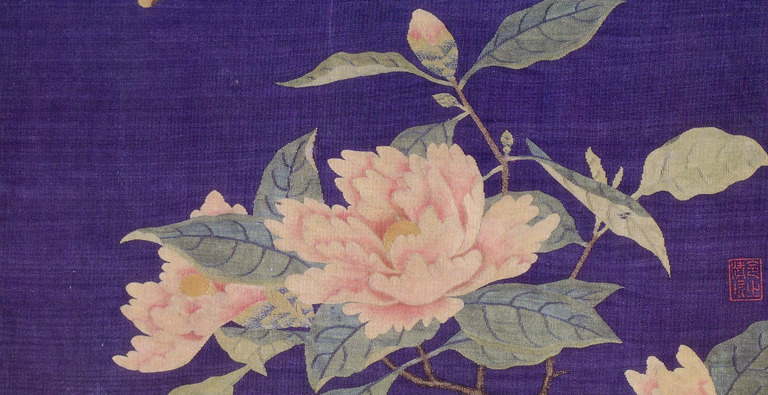 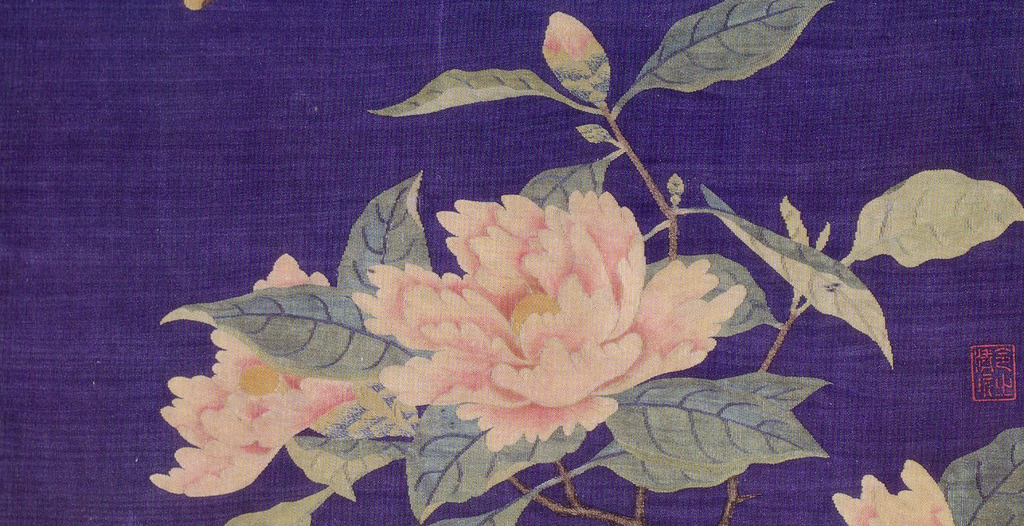 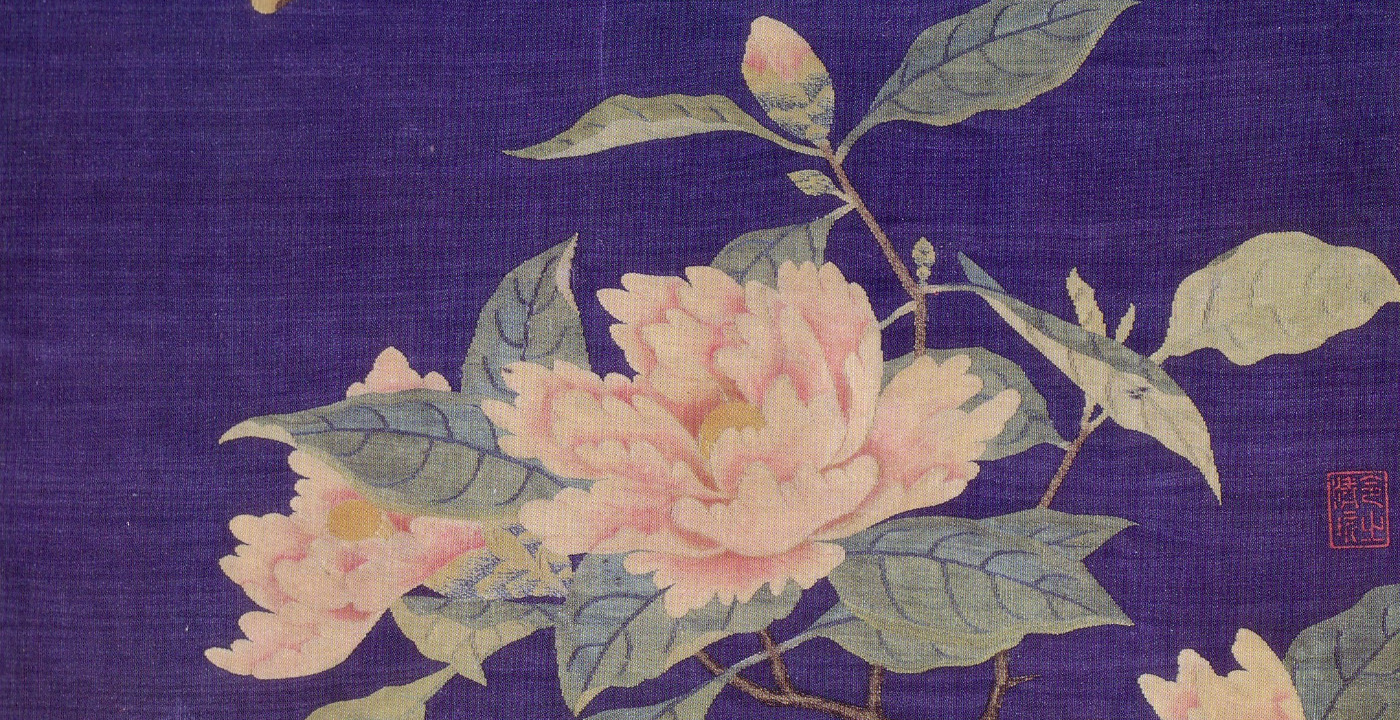 Zhu Kerou’s dates are often given as fl. 1127-1162 CE and it is said that she lived and worked in Yunjian 雲間, today’s Songjiang 松江, a suburb of Shanghai 上海.

There is no historical information on how Zhu Kerou was educated.  Some modern scholars have theorized that she was trained as a painter.  Because Zhu Kerou is known only by her weavings, it is clear she was trained as a weaver.  The works with her names on them are exquisite and show the work of a very skilled tapestry weaver.

We have almost no information about the historical woman, Zhu Kerou.  However, her works are the first signed tapestries in China to use tapestry weave to depict pictorial compositions rather than patterns.

During the time she was believed to live, the Southern Song dynasty (1127-1279), farming techniques were made more efficient, and silk was produced in abundance.  Many weavers, responding to this excess of silk, produced fancy weaves and luxury silk goods.  It is possible that Zhu Kerou’s works were a part of the interest in luxury silks during the twelfth century.  Her luxury silks were not luxurious weaves for clothing such as gauze or damask, but rather tapestry weave; silk weavings that created images reflectinng the trends in painting at the time.  The innovation in her work is the use of woven silk threads to create a painting-like composition.

Zhu Kerou is known for her pictorial silk tapestry weavings, kesi 緙絲.  Tapestry weave is a type of weave that uses continuous warps and discontinuous wefts to create a reversible image with threads.  Tapestry weave techniques had been used in China since the Tang dynasty (618-907).  Around the year 1127 CE, during the Song dynasty, we see the shift in the production of tapestry weave reproducing patterned textiles produced with a drawloom to asymmetrical compositions that reflect a knowledge and interest in painted compositions.  It has been theorized that Emperor Huizong徽宗 (r. 1101-1126) initiated this shift in conception of what a woven textile could do.  However, Zhu Kerou is one of the first artists to weave her signature into such a composition as a weaver.  Contemporaneous to Zhu, are a few works incorporating signatures of the painter of an image, woven by an anonymous artisan.  Another weaver who includes his signatures in his compositions is Shen Zifan 沈子蕃, who ostensibly worked during the same period as Zhu.

Seven kesi weavings with Zhu Kerou’s woven seal are still extant in Asian collections.  Most of her extant works are small-scale, measuring approximately 25 cm square.  These include Butterfly and Camellia (Fig. 1) and Peony, both in the collection of the Liaoning Provincial Museum, Shenyang.  Her only known large-scale composition, Ducks on a Lotus Pond (Fig. 2), is in the collection of the Shanghai Museum of Art.  Wagtail and Polygonum (Fig. 3), Peach Blossom and Thrush, Bird and Flower, and Wagtail, are all in the collection of the National Palace Museum, Taipei.

Two no-longer-extant works are mentioned by Zhu Qiqian in Notes on Silk and Embroidery.  These works are titled Citron and Autumn Bird and Lofty Retreat Amid Clouds and Mountains.

Zhu’s weaving, Butterfly and Camellia is mounted next to a laudatory inscription by the well-known Ming painter, Wen Congjian 文從簡 (1574-1648).  Wen Congjian was a member of the well-respected Wen family, based near today’s Suzhou, known for painting, calligraphy, and connoisseurship during the Ming dynasty.  By writing about Zhu Kerou's weaving on paper mounted right next to the work itself, Wen Congjian embedded it within the same apparatus of textual commentary and appreciation normally associated with the high literati arts of painting, calligraphy, and poetry.  This work of weaving becomes part of the literati culture of commenting on works of art, which add to their value by creating a connoisseurial history of those who have appreciated the work.  The work is absorbed into the elite male-dominated culture of connoisseurship.

Dorothy Ko has argued that as more women became painters, men began to write about women’s textile work as a woman’s sphere of artistic production, therefore excluding women from the elite male world of painting.  Men therefore create gendered spheres of creativity and promoted textiles as the Confucian and proper place for women’s work and artistic endeavors.

We have no information about how Zhu Kerou’s work was received during her lifetime.  Her name does not appear in local gazeteers.  The first known time her name is written and discussed is in a calligraphic inscription written by the above-mentioned Wen Congjian, mounted next to Butterfly and Camellia (Fig. 1a).  This inscription is the earliest biographical information we have on Zhu Kerou.  The inscription is translated as follows:

Zhu Kerou was a native of Yunjian [Songjiang] and she lived during the Southern Song dynasty. She was famous for women’s work [weaving]. The exquisite skill shown in her works with figures, trees, rocks, flowers, and birds, is almost supernatural. She was highly esteemed during a certain period and her pieces that survive are very rare. This small picture is full of quiet elegance and expresses the taste and culture of a famous artist of the past. It has essential and natural beauty [lit: she has done away with feminine artifice]. Her skill is so extraordinary; she handled the silk as if handling a brush. Her technique was such that people today cannot even dream of seeing [such skill]. This work should be treasured. Written by Wen Congjian of Yanmen.

If we can rely on Wen Congjian’s inscription as based on oral tradition or a no-longer extant text, it states that Zhu Kerou was an admired artist at a certain point in time, but her name had been forgotten by many until the Ming period.  During the Ming dynasty, there was an interest in reviving the culture of the earlier Song dynasty, in no small part because the Yuan dynasty (1279-1368) between the two was founded by the Mongols, who were seen by Han Chinese as foreign usurpers.  Therefore, the Ming elite viewed the Song dynasty as the height of Chinese culture; any work of art dating to the Song was treasured.  Many Ming artists emulated earlier Song artists in style.

Since the late Ming, Zhu Kerou’s name had been known in literati circles.  Her works were collected by major art collectors of the late Ming and Qing dynasties.  Eventually, some of her weavings were incorporated into the imperial collection during the Qing dynasty, demonstrating the appreciation of her work at the highest level of society.

Because Zhu Kerou was not well known to the general population, even of literate and cultured individuals, her work is not widely influential.  However, her name has been attached to many later works of kesi in order to give them value.  It is a tradition in connoisseurship of Chinese art to attribute works by unknown artists to famous names.  Because of this tradition, hand-written labels, likely written by collectors or dealers, on anonymous kesi often carry the name of Zhu Kerou.  Contemporary curators and connoisseurs understand this tradition and it is often acknowledged with a sense of humor, however the use of a famous name on an anonymous work demonstrates the power of that name.  Zhu’s name has become synonymous with expert weaving in kesi and is used to add value to anonymous works of tapestry.  Just one example is the Kesi Tapestry of Duck and Grasses dated to the Qing dynasty in the Freer Gallery of Art, Washington D.C., which has been labelled as the “true traces of Zhu Kerou” in the ink-written label pasted to the tapestry’s mounting.

A few scholars have proposed verbally (none in writing) that works with the name of Zhu Kerou woven into them date from the Ming or Qing periods, not the Song.  It is conceivable that the works bearing her name are later copies or later works altogether.

Another controversial theory is that Zhu Kerou is a fabricated figure, made up by men who were interested in talented women during the late Ming period.  As mentioned above, Ming and Qing elite admired and desired to collect works of art produced during the Song dynasty.  At the same time, works by talented women were treasured, while women who chose embroidery and weaving as a creative pastime were framed as the most Confucian and therefore to be admired.

Issues with the sources

The inscription by Wen Congjian is seemingly authentic to the late-Ming artist, however his knowledge of Zhu Kerou and her work appears in no other extant source before his hand-written inscription on her work.  In fact, biographical information on this weaver is so scarce, we know little more about her than her works tell us.

The tapestry weaves themselves are fragile, light-sensitive objects and therefore rarely exhibited.  Nor are they compared with other works by the same artist or works of the same time period.  Studies in connoisseurship and authenticity of kesi are lacking in the field and numerous kesi are inaccurately dated accordingly to traditional sources.