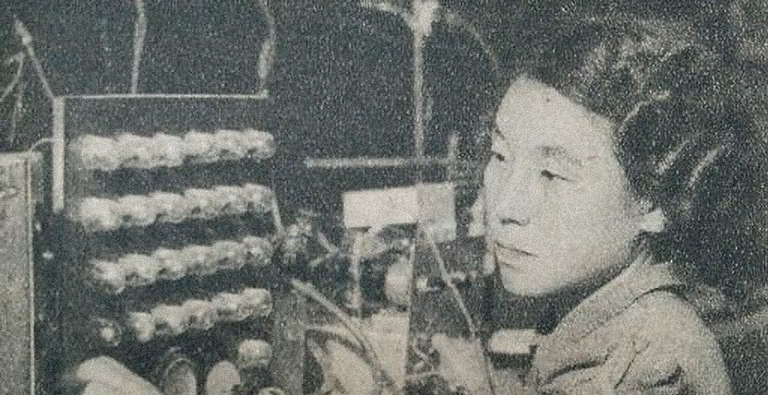 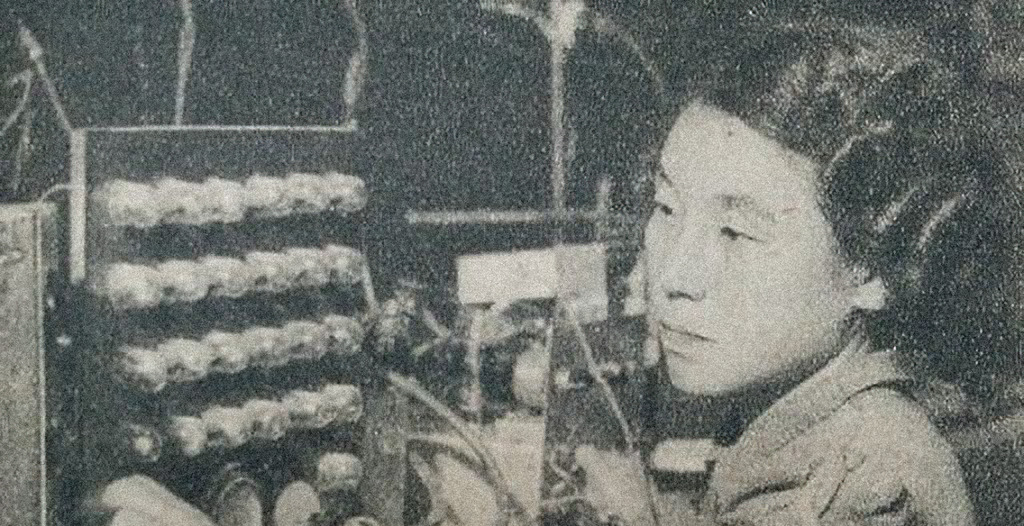 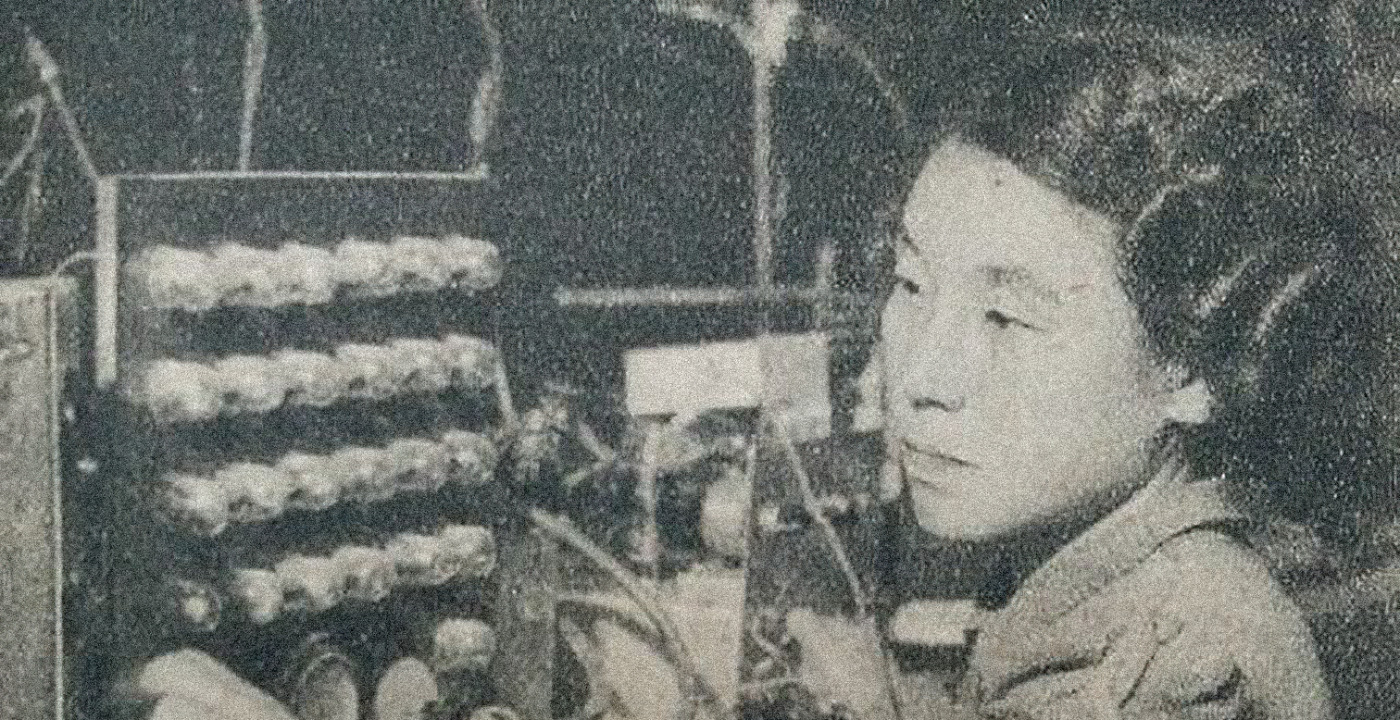 Mother: Reiko Yuasa (née Tachibana) was the great-granddaughter of Moribe Tachibana (1781-1849), one of the four great poets of Waka (a traditional Japanese form) in the Edo period. The Tachibana family belonged to the Samurai class. Moribe Tachibana was also a great savant of Japanese classical culture; as his descendant, Reiko was especially well educated about Japanese culture.

Father: Tohichiro Yuasa was an elite engineer and a graduate of Tokyo Imperial University. The Yuasa family also belonged to the Samurai class during the Edo period.

Subsequently, both the Tachibana and Yuasa families belonged to the same Shizoku social class (ancient Samurai class) in modern Japan, although the Tachibana family was the more venerable of the two.

Reiko and Tohichiro had eight children: three sons and five daughters (the last girl died very young). Toshiko was the sixth of the Yuasa siblings.  As the family enjoyed great wealth, every child had her/his own nanny. Tohichiro was enthusiastic about education and ensured that all his children were well educated: Toshiko’s brother Fujio (the seventh child) would also become a scientist.

Marriage and Family Life [Spouse(s), children, and siblings. Be sure to mention all relatives by name, including females (with birth and death dates), especially those of consequence.]

Toshiko Yuasa was not married.

Fascinated by the wonders and beauties of natural phenomena, Yuasa enrolled in the Department of Science at Tokyo Higher Normal School for Women (now Ochanomizu University) in 1927- at the time, the Higher Normal School, though it was an institution of higher education, was not included in the university category.  Incidentally, she also received her secondary education at the high school attached to this institution.

After graduating from the Higher Normal School in 1931, Yuasa enrolled in the Department of Physics at Tokyo Bunrika University (now Tsukuba University), one of very few mixed universities at the time. In contrast, both her father and her younger brother Fujio studied at Japan’s top university, Tokyo Imperial University, which did not accept female students. Yuasa was the very first female student to enroll in a Department of Physics in Japan. She specialized in atomic spectra. In 1934, she began working as an assistant at Tokyo Bunrika University. The following year, she became an assistant professor at Tokyo Woman’s Christian University, before returning to Tokyo Higher Normal School for Women as an associate professor in 1938.

Despite this apparent career progression, in the context of the extreme gender inequality present in prewar Japan, Yuasa’s associate professorship was not as privileged as the role of a researcher. Inspired by the work of Irène and Frédéric Joliot-Curie on artificial radioactivity in 1938, she decided to pursue research in nuclear physics at a laboratory in France. As a scholarship student of the French government, Yuasa left for France in 1940, by which time WWII had already begun. Under the direction of Frédéric Joliot-Curie, she studied in the nuclear chemistry laboratory at the Collège de France in Paris and obtained a doctorat d’État ès sciences in 1943.

Unlike the West, Japanese culture was polytheistic following the introduction of Buddhism in the sixth century. Since then, Japanese religion has been characterized by the syncretism of Shintoism and Buddhism. During the Edo period, for example, it was common for a shrine and a temple to coexist on the same site, and for one person to manage both of them. Wedding ceremonies would be conducted in the style of Shintoism, while funerals followed Buddhist convention, and so on. While her family held such a view of religion, Yuasa struggled from a young age with the dilemma of how humanity could live with such an ambivalent view of religion and how scientists in particular should confront this premise.

Through her studies in France, Yuasa had made many Catholic friends whose monotheistic beliefs ran counter to those of worshippers in her homeland. She was also influenced by the atheism of her respected teacher, Frédéric Joliot-Curie, his wife Irène, and their teacher, Marie Curie. She continued to wrestle with the subject of what ‘God’ was and the apparent clash of faith and materialism. Following a lengthy battle with cancer (she had surgery for stomach cancer in 1973), Yuasa converted to Catholicism at the hospital shortly before her death in 1980. However, some debate remains as to whether this was the result of her own deliberations or forced on her in her semiconscious state by surrounding Catholics and priests.

Before WWII, despite being Japan’s first female physicist, Yuasa was a relative unknown. After the war, however, she became a well-known figure not only in the sciences but in wider Japanese intellectual society, both as a state-of-the-art nuclear physicist who studied under Frédéric Joliot-Curie and as an intellectual connoisseur of France living in Paris.

In 1976, Yuasa was awarded the Japanese Medal with Purple Ribbon for her scientific research, for her work in caring for many Japanese people in Paris, and for continued activities to educate the French in Japanese culture.

Yuasa’s scientific research also received great acclaim in France. Even after her retirement from CNRS, she was given the unusual honor of a Chief Researcher Emeritus role: an honorary researcher with guaranteed research location and funding. This allowed Yuasa to stay in Paris as an active researcher until her death at the age of 70.

Following her death in 1980, various commemorative events were held in both France and Japan. In Japan, in addition to a private funeral held by her family, a large-scale farewell party was held at the Maison Franco-Japonaise, and various in memoria were published in academic journals. A Toshiko Yuasa Memorial Symposium was held in 1995 and again in 2009, attended by CNRS physicist and former colleague Hélène Langevin Joliot, the daughter of Irène and Frédéric Joliot-Curie. In Paris, a CNRS workshop entitled “Yuasa Toshiko Tribute” was also held in 2008. In the same year, the National Museum of Nature and Science in Japan held an exhibition focusing on women scientists in the early days of modern Japan; Yuasa was a central protagonist.

Toshiko Yuasa has been called “the Japanese Madame Curie” and widely celebrated as a role model for Japanese women in science. In 2010, the France Japan Particle Physics Laboratory was renamed the Toshiko Yuasa Laboratory (TYL) to commemorate her remarkable scientific achievements (http://www.actu.u-psud.fr/fr/international/actualites-2014/laboratoire-international-franco-japonais.html)

Since 2013, Yuasa’s alma mater, Ochanomizu University in Tokyo, has offered the Toshiko Yuasa Memorial Scholarship Fund for Special Researchers in memory of her contributions to science and Franco-Japanese relations and to encourage the international activities of young female scientists today.

As a female scientist, Yuasa encountered pervasive sexism, especially in prewar and early postwar Japan. In response, she left numerous writings on the subject of “Women and Science,” which frequently pay tribute to her own role models: Marie Curie, Irène Curie, and Kono Yasui, her former teacher and the first female doctor of science in Japan. However, as ought to be expected for the time, Yuasa’s writings do not bear any of the hallmarks of second-wave feminism; she believed that there was no difference between men and women and that “working earnestly and showing off her abilities,” as Marie Curie had done, was the only way to free women. Like many French intellectuals at the time, she considered the American feminist movement during 1960s and 70s to be too radical and that it would only aggravate the conflict between men and women.

During her time in France, the research contexts in which Yuasa worked were extremely unique in terms of their prospects for gender. The nuclear chemistry laboratory at Collège de France was led by Frédéric Joliot-Curie; both his teacher Marie Curie and his wife Irène were Nobel Prize-winning scientists. Likewise, the Radium Institute was led by André Debierne, a colleague of Marie Curie. As a result, Yuasa’s view of the French scientific environment—and her criticisms of its Japanese counterpart—was undoubtedly biased and overlooked the continuing gender inequality in France’s other general scientific institutions.

Catalog of Toshiko Yuasa’s (1909–1980) Archives, Public Resources (Tokyo: Institute for Gender Studies of Ochanomizu University, 2009). This contains lists of all her scientific articles.

Issues with the Sources

The majority of Yuasa’s articles (almost all in English or French) and books (only in Japanese) have not been digitized; her Japanese journals and correspondence are stored by one of her nephews and are thus virtually impossible to access. Only those sources permitted by Yuasa’s bereaved family in Yuasa’s Archives at Ochanomizu University can be examined. As for French sources, the Curie Archives in Paris has some correspondence and papers. Numerous scientific documents are kept at Paris-Sud University, Yuasa’s last place of work; however, these are not classified and are thus impossible to access.

University
C. 19
Back to filters