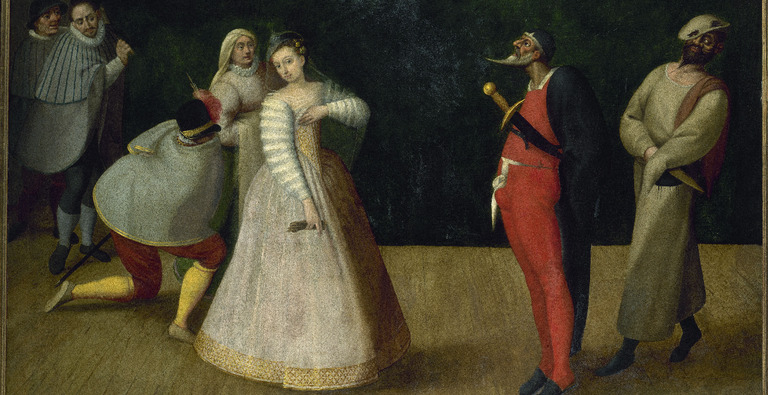 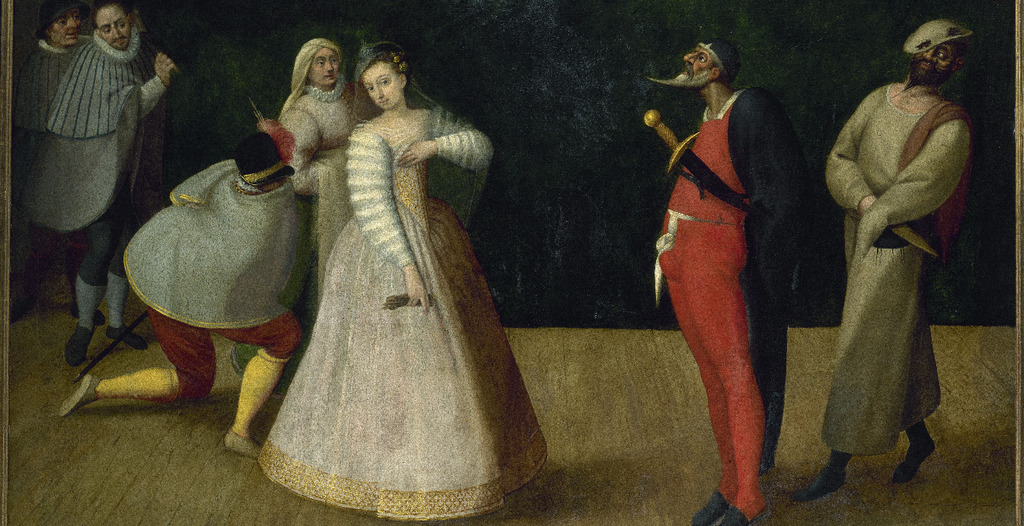 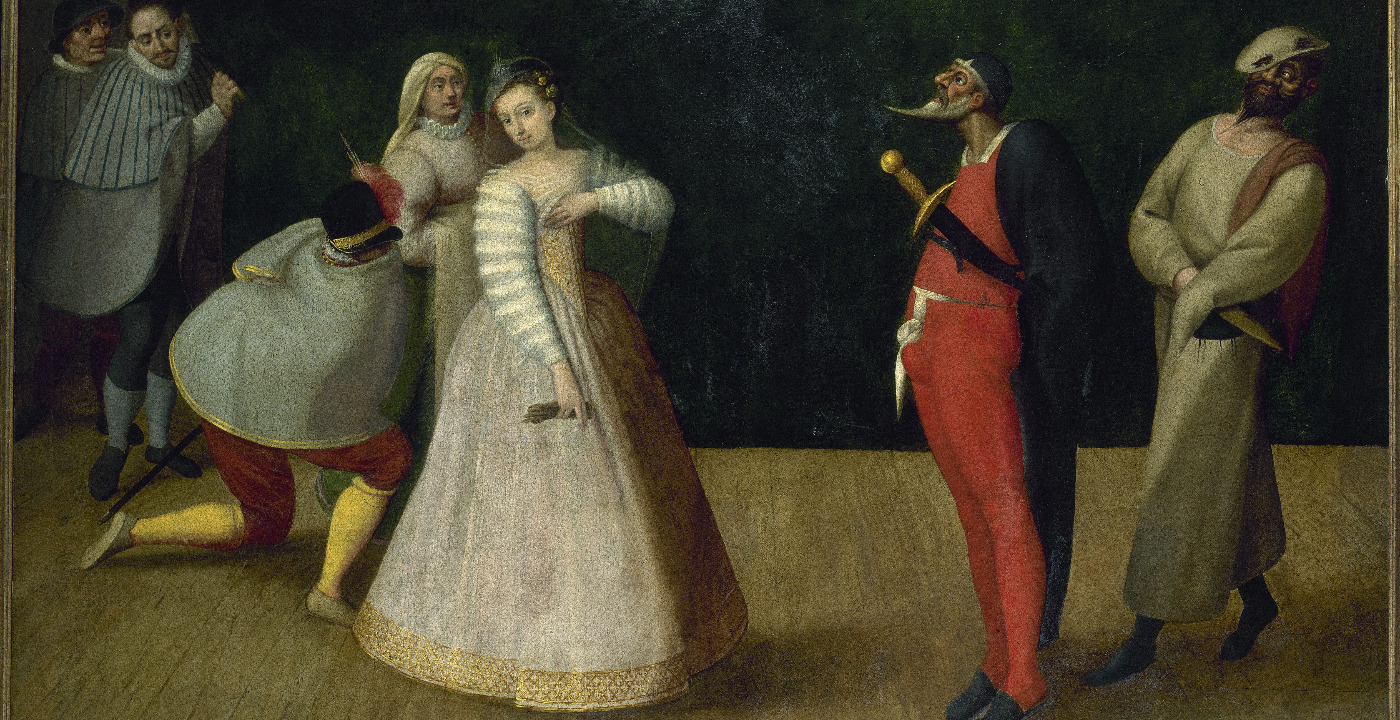 The source of her education is obscure.

Note: In Music and Women of the Commedia dell’Arte, Anne MacNeil notes that his father is Antonio Andreini (187). In The Birth of Feminism, Sarah G. Ross posits that he may have been a member of the “Cerrachi family, which was later called Dal Gallo” (214).

Children: They had three sons and four daughters. Nothing is known of two of the daughters. The others are as follows:

Isabella Andreini was exceedingly well educated, but the source of her education is obscure. Her extensive body of published work, including her pastoral tragicomedy La Mirtilla (1588), her rime (1601, 1603, 1605), her lettere (1607), and her contrasti and ragionamenti (1617) demonstrates a rich humanist education. Her membership in the Accademia degli Intenti of Pavia and her correspondence with humanist scholar Erycius Puteanus illustrate her acceptance among the most learned members of her society. Her performances with her commedia dell’ arte troupe the Gelosi were touted as marvels of eloquence, and she was praised widely for her linguistic and musical talents.

In The Rise of the Diva, Rosalind Kerr observes that Andreini’s “extensive classical education and training in the fine arts and her skills as a poet and musician are more consistent with the traditional upbringing of an honest courtesan than of a woman of a respectable family” (103). In The Birth of Feminism, Sarah G. Ross posits that Andreini could be an illegitimate daughter of the patrician Canali family of Venice, but accepts that that possibility seems unlikely (214). In general, it seems that Andreini received an excellent humanist education early in her life and that she continued to cultivate it herself throughout her adulthood.

Isabella Andreini is believed to have been born in very humble circumstances. Although the chronology of events is not clear, her meeting at approximately age thirteen with Francesco Andreini, who was already a well-known actor, led to her own acting career, setting her on the path to what we would today call superstardom. Their admired marriage and family life were the foundation which enabled her to cultivate her reputation for great virtue, in spite of being an actress—a profession typically associated with prostitution in the popular imagination. Her own intellect, wit, beauty, and talent opened doors for her to engage with intellectuals, poets, and her noble and royal fans.

From the dedications of Andreini’s poetry, we can see that she was involved in networks of performers, academicians, and royal and noble patrons in Italy and in France.

--La Mirtilla (1588). Note: the play was published approximately 9 times by 1616, including a French translation.

Note: The ragionamenti and the fragmenti are the same short dialogues.

Note: For dates and places of some performances by the Gelosi, see MacNeil’s Chronology, 187-263.

By the time Andreini suffered a miscarriage and died in Lyon on 10 June 1604, she was an international superstar and one of the most acclaimed divas of the early modern stage. She was given a state funeral, and a medal was struck in memory of her. Its inscription referred to her as an “eternal flame.” She had enjoyed the patronage of the powerful Este, Gonzaga, and Medici families, and she was profoundly popular with the French court.

Her literary works were praised by many of her contemporaries, including such figures as Giambattista Marino, Jacopo Castelvetro, Gabriello Chiabrera, Ridolfo Campeggi, Eyricius Puteanus, and Ercole Tasso, and her membership in the Accademia degli Intenti only increased her fame among humanist scholars. In The Rise of the Diva, Rosalind Kerr traces Andreini’s rise to fame during her lifetime (102-146). Andreini is the rare female virtuosa who has never been lost to literary, theater, or music history, but her fame has experienced a renaissance over the past two decades as feminist interest in the recovery and reconsideration of early modern women writers and performers has increased.

From the dedications of Andreini’s poetry, we can see that she was involved in networks of performers, academicians, and royal and noble patrons in Italy and in France.

Andreini’s engagement with feminist and social issues becomes visible in her works. Perhaps most humorously, her feminist sensibilities may be seen in Act Three of her pastoral, La Mirtilla, where the satyr, a standard character in pastoral comedies, threatens the nymph Filli with rape. Instead of requiring rescue from a hero, Filli—the character Andreini is thought to have written to perform herself—tricks and entraps the Satyr. She pinches and scolds him soundly, and feeds him a bitter herb. She leaves him tied to a tree and strolls away, vindicated, leaving him quite literally with a bitter taste in his mouth. In this scene, Filli rescues herself and teaches the Satyr lessons in how not to treat women.

Beyond humorously dealing with satyrs in La Mirtilla, Isabella addresses social issues involving the birth of female children and marriage in her work. In her Lettere (1607), she includes a letter to a gentleman whom she chastises for expressing his disappointment in the birth of a daughter (Lettera del nascimento della donna). She exhorts him to trust God’s good judgment regarding the choice of a daughter, and she points out that many sons have been known to bring families to ruin. She emphasizes women’s many good qualities, most of which she suggests that they cultivate in the face of oppression by men, and she includes a catalogue of good female exempla. In general, Andreini engages with the literary quarrel called querelle des femmes as a defender of women in this philosophical letter.

In “Sopra l’amor conjugale,” one of the contrasti amorosi (humorous short dialogues) written for performance by Franscesco and herself, found in the Fragmenti di alcune scritture (1617), she writes the part of a young woman called Hippodamia who grills her fiancé Tarquinio on the future she faces as they will begin their married life in his father’s home. Hippodamia voices her fears that her mother-in-law will treat her badly out of jealousy and that her father-in-law might sexually abuse her. She breaks off that portion of her commentary quite quickly, which suggests that especially the latter is a taboo subject, although in the speech itself she implies that this is a common occurrence for young married women. The dialogue ends with Tarquinio assuring her that she will be treated well by his family and that she will not be subject to tyranny in the household. The whole conversation is treated humorously, but the topics are clearly serious ones meant to strike a chord with her audience regarding contemporary social issues for women.

Controversy. Andreini’s commedia dell’arte troupe, the Gelosi, was adored by the French court, but it was not universally lauded by those who scorned the theatre as a den of iniquity. In La Premiere atteinte contre ceux qui accusent les comedies (1603), Marie de Beaulieu, a lady-in-waiting and personal friend of Isabella, praises and defends the Gelosi against those who disparage them. Despite the aspersions cast on actors and the theatre milieu in general, the Gelosi, along with many other commedia troupes, thrived during the period.

---, edited by Valeria Finucci and translated by Julia Kisacky, The Other Voice in Early Modern Europe (Toronto: ITER/ACMRS, 2018).

Volumes of Andreini’s works may be found in many research libraries in Europe and the U. S.

Issues with the sources. One issue that arises regarding Isabella Andreini’s works is that especially for the lettere and fragmenti published after her death (1604), and edited by Francesco, scholars have questioned how much of that material may have been added or augmented by Francesco.