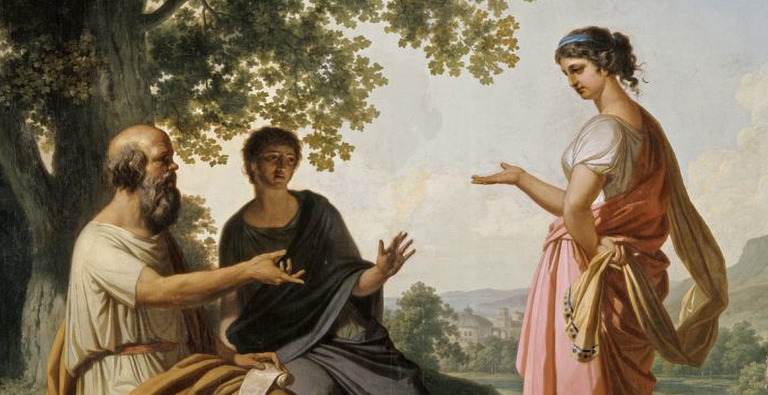 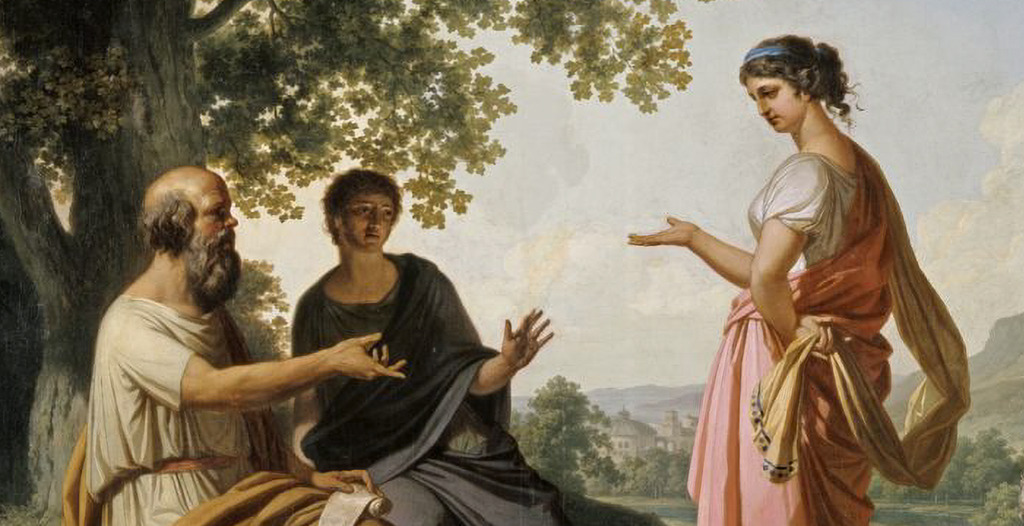 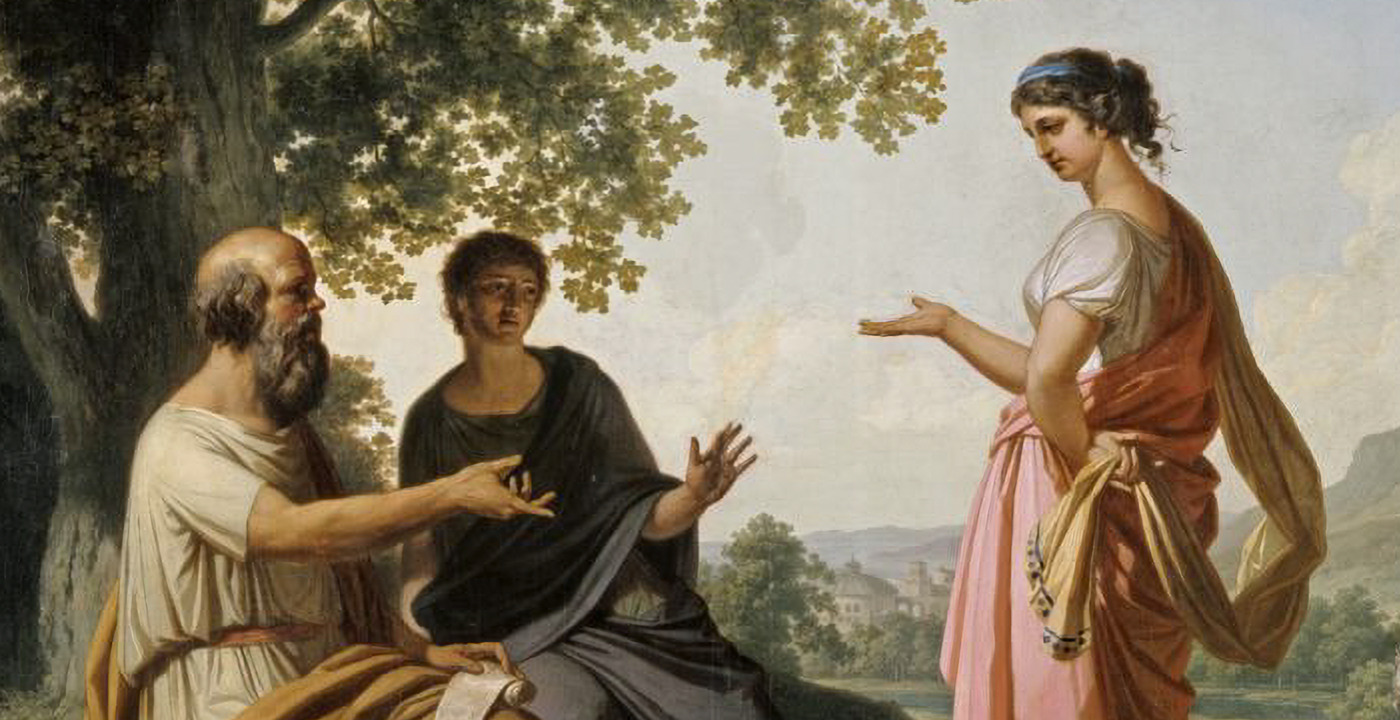 Plato calls her “wise” in his Symposium, but we have no concrete sense of her education.

Plato hints that Diotima was a powerful priestess, for she forestalled the plague in Athens for 10 years due to her prayers.

The only trace of a network lies in the fact that Plato implies that Diotima is a priestess – in particular, many scholars argue, of the Eleusinian mysteries. This means that she would have been part of a powerful group of women with sacred knowledge of rituals and traditions.

The closest link to Diotima is Aspasia, a woman whose historical existence is now, for the most part, assumed. In his Menexenus, Socrates attributes a funeral oration to Aspasia and claims that she schooled him in the art of rhetoric; thus, like Diotima, she serves as a teacher figure for the male philosopher.

The only independent record of her is in Plato’s Symposium, when Socrates reports what she has taught him about love to the rest of the (entirely male) drinking party guests.

She is mostly treated in the disciplines of Classics and Ancient Philosophy.

Diotima’s historical existence cannot be conclusively proven, but in antiquity there is no indication in sources after Plato (such as Lucian) that she must have been invented by Plato. When Plato’s texts were mostly lost to the Latin West, her name also disappears; for example, she does not appear in Boccaccio’s otherwise comprehensive On Famous Women (1374). In the Renaissance, when Plato’s entire corpus is reintroduced to the West by Eastern scholars and is translated into Latin by the talented humanist Marsilio Ficino, Diotima reappears as a figure of immense interest.  Her name is invoked by men and women as an exemplar of ancient female learning and wisdom, appearing in philosophical dialogues, poetry, and textual commentaries. In the early modern period, she is cited in catalogues of historical women as proof that women should have access to education. In the late 18th and early 19th centuries, Diotima starts to be mythologized by male scholars and abstracted from historical reality. When the discipline of Classics is codified in the European university in the 19th century, early philologists and commentators on Plato take it for granted in their scholarship that Diotima is a figment of Plato’s imagination. This interpretation largely persists today, with a few notable exceptions. Another popular reading of Diotima is that she is a fictive stand-in for a real ancient Greek female philosopher, Aspasia, whom Plato mentions most notably in his Menexenus.

*Critiques of existing/experiments with new knowledge-ordering systems. Diotima’s account of love in Symposium is significant, as hers represents the only female voice in the entire dialogue. It is noteworthy that the other men in the room do not discredit what Socrates says on the grounds that he has reported the teachings of a woman. In her exchange with Socrates, Diotima transforms the conventional language of female fertility and childbearing into philosophical creativity and legacy. Combined with the de-gendering of the philosopher (a lover of wisdom can be a man or a woman) in the Republic, and the examples of female lovers in the Symposium, Plato opens up a space for women in philosophy.

The most recent scholarship on Diotima can be found in Armand D’Angour’s 2019 Socrates in Love, which treats Socrates’s relationship with Aspasia and takes seriously the question of whether Diotima is a fictional stand-in for the historical Aspasia.

An online database devoted to “materials for the study of women and gender in ancient Greece” is named Diotima.

The most significant point of controversy and debate is the question of whether Diotima is a historical person or is invented by Plato. No other character in a Platonic dialogue has been the subject of such intense scepticism. Ancient sources after Plato do not raise the issue. My own research (in my MA thesis and in forthcoming articles) seeks to debunk an influential scholarly claim that an Italian Renaissance humanist is responsible for first adopting the interpretive stance that Diotima must be fictional because a woman could not teach a great philosopher like Socrates. I have shown that the humanist in question does not, in fact, make such a misogynist claim, and that this ad hominem argument actually appears earlier, in a debate between two Byzantine scholars as to whether Plato or Aristotle was the superior philosopher. As far as I can tell, the question of her historicity begins in earnest with the rise of the European university in the 19th century, as the discipline of classical philology emerges and male scholars begin to write philosophical commentaries. Even then, however, the arguments presented are not explicitly misogynist, even if the underlying motivation for questioning her existence betrays a misogynist attitude. For the most part, contemporary Classics scholarship takes for granted that she is a character invented by Plato, and possible reasons givens for this invention differ.

Diotima became a symbol of feminist resistance in Italy in the 1980s. In 1987, three Veronese philosophers published a volume called Diotima: Il pensiero della differenza sessuale, and shortly thereafter, a volume called Il Filo di Arianna: Letture della differenza sessuale. These thinkers labelled themselves under the collective Gruppo di filosofia Diotima, or the Diotima group. This led to what Renate Hub has called “the Diotima phenomenon,” which swept across Italy, in particular.

Nothing outside of Plato’s Symposium

Issues with the sources

The most significant issue is that we have no information about Diotima outside of Plato’s text.