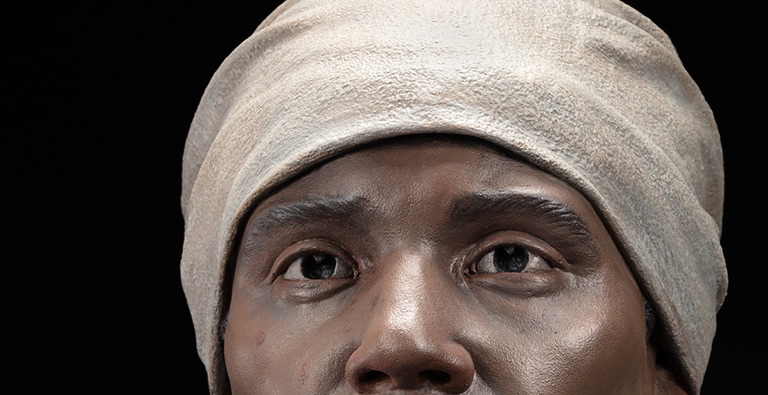 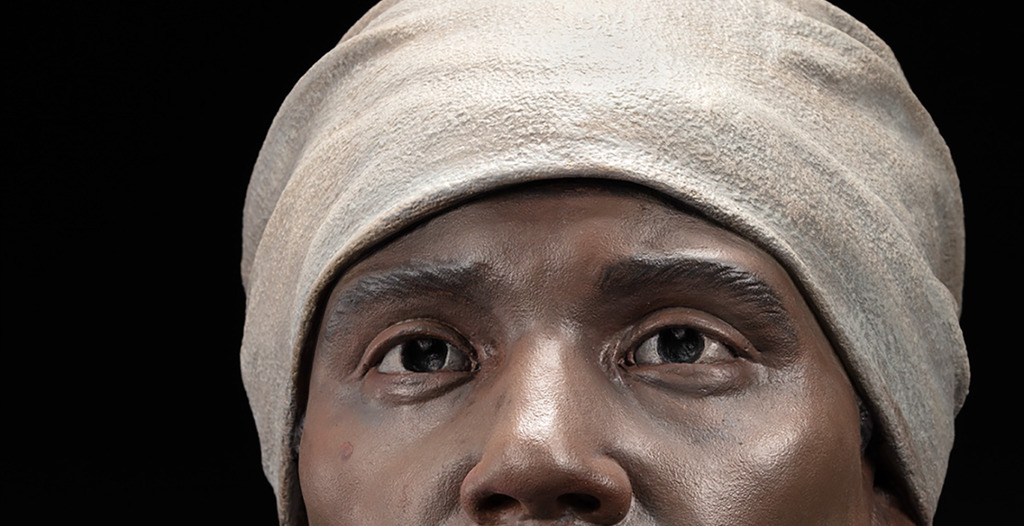 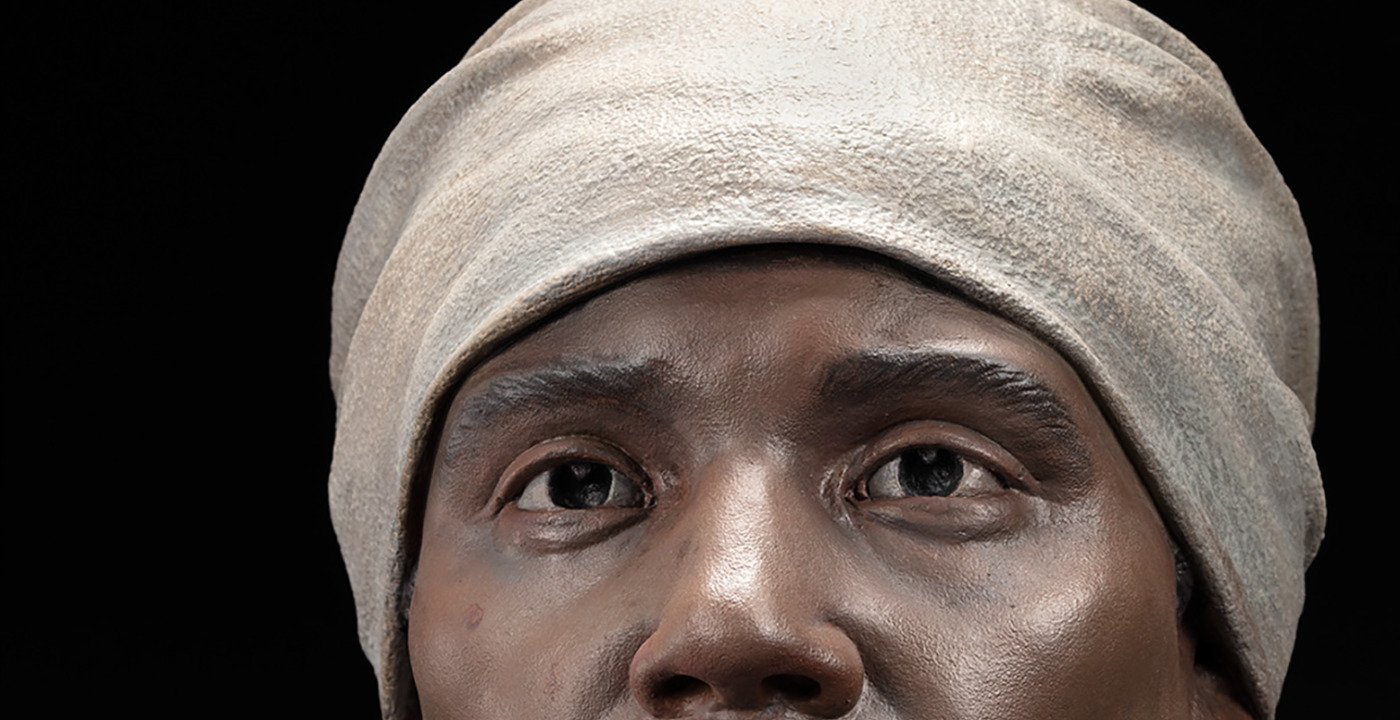 This woman’s child was buried above her in the same grave, and a brother is buried nearby.

Unknown, although some enslaved workers at the Catoctin Furnace ironworks attended services held by ministers at Graceham Moravian Church, 4.5 miles distant. The records of the Moravian Church contain multiple accounts of the enslaved at Catoctin as well as at neighboring farms. Apparently, Moravian ministers were visiting the furnace several times a month and conducting open-air services as well as marriages, baptisms, and burials. These original diaries, written in Old German by the ministers beginning in 1750, are held in the Moravian Archives in Bethlehem, Pennsylvania.

The Moravian ministers recount that the furnace owners allowed services but insisted that the enslaved return to work at the furnace immediately after the service ended. Diary entries include these May 29 and 30, 1803 observations: “…at 2 o’clock in the afternoon 40 of the blacks assembled to hear Brother Herbst…then Br. Loskiel spoke to each one individually…3 black women also came quickly with their children (from 8–10 miles away) since they hadn’t known of the visit ahead of time, to hear calming words for their hearts and to baptize 2 of the children.”

This woman, aged 30 to 35 years at the time of her death, shared a grave with her infant son. Her brother, who died as a toddler, was buried nearby. DNA analysis revealed their biological kinship and African origins. Their relatedness is further expressed by craniostenosis, a shared congenital condition causing early union of bones in the skull, often affecting its shape. Skeletal changes also affected this woman’s left hip, likely causing pain and a noticeable limp. This condition, known as Legg-Calvé-Perthes disease, and osteoarthritis affecting her left hip joint, probably manifested in a tilt of her head and neck to compensate. While the cause of her death is unknown, complications of childbirth may have been involved. Her infant son lived only a few months and was buried above his mother.

As many as 271 enslaved persons worked at Catoctin Furnace in the late 18th and early 19th centuries. Their roles at the furnace may have included fine finishing of the cast-iron stoves, pots, and other products. Additionally, enslaved women worked in the owners’ home as cooks, cleaners, laundresses, and nannies.

Today, the cast-iron stoves and other works produced at Catoctin Furnace are regarded as including the expertise and skills of female enslaved workers.

In the 1970s, a highway expansion project resulted in the excavation of 35 graves of African Americans at Catoctin Furnace, among them those related to this enslaved woman. The graves had previously been lost to history. Left out of the written record in name and deed, the individuals are revealed within the archaeological record.

Initial analysis in the early 1980s by Smithsonian anthropologist J. Lawrence Angel identified the remains as African or African American, associated with the late-18th- to early-19th-century operation of the ironworks. By the mid-19th century the slave labor economy in the region had changed to a system of free labor fueled by the increasing number of European immigrants. African Americans left or were sold out of the area, and there is no descendant community that traces its roots to these early workers. Historical interpretation of the operation and success of the ironworks almost exclusively focuses on the Anglo-American experience. Renewed efforts to learn more about these poorly documented early laborers, and to connect the past with the present, prompted reanalysis of the Catoctin remains. In 2015 the Catoctin Furnace Historical Society was awarded a Maryland Historical Trust/Maryland Heritage Areas Authority Non-Capital Grant to fund a two-part research project aimed at increasing public awareness of the role of enslaved African Americans in the iron industry. The project’s first phase involved updated forensic analyses of the human remains from the cemetery, including reassessments of demography and pathology, carbon and nitrogen stable isotope studies, heavy metals analysis, and comparison to Mid-Atlantic historic and anatomical reference collections.

As the rediscovery and reanalysis continued both at the Smithsonian Institution (forensic anthropology) and at the Catoctin Furnace Historical Society (historic documentary and genealogical research), we collectively recognized the need to relay the findings to a larger audience in visual form. Forensic facial reconstruction of two of Catoctin Furnace’s earliest workers was undertaken, providing a visual bridge for translating current scientific findings to a broad audience, fostering dialogue on complicated subjects such as slavery, death, and disease while increasing public awareness of the valuable contributions of enslaved Africans and African Americans.

Created within the Brooklyn, New York, workshop of StudioEIS, the facial reconstructions (a young man approximately 15 years of age and a mother in her 30s) are the emotional centerpiece of the new Museum of the Iron Worker. The historical interpreter Cheyney McKnight (Not Your Momma’s History) brought her expertise to the studio, creating the head wrap for the mother. Cheyney chose a simple linen wrap, appropriate for the time period and circumstances. Now, the art and science of forensic facial reconstruction allows you to meet these individuals. Their names are unknown, but we can see their faces and tell something of their stories. The loss of children, physical pain, family separation, disability in life, heavy labor, and early death present poignant life histories shared by others in the cemetery based on the findings from Catoctin and other historical ironworks.

Archival research focused on reconstruction of the population of the cemetery has resulted in the compilation of 271 first names. This, understandably, proved a difficult task because census data, which is reliable for studying white populations, does not reliably list slave names; therefore, other sources were relied upon, including church registers, deeds of sale, manumission records, wills (probate), and freedom-seeker ads.

The mother was the inspiration for a volume of poetry entitled Catoctin SlaveSpeak by Elayne Bond Hyman. The poet and author wrote in “The Greatful Dead” about the enslaved at Catoctin Furnace, including the mother:

By calling out our names at the sound of the chapel bell we are remembered.

By keeping watch over the earth, our sacred place, we are honored.

By studying our bones, dug up and reassembled, we are made human.

By reciting our stories, spoken in the language of poetry, we are resurrected.

Many generations who come upon us will know we are full of greatness!

New and Unfolding Information and/or Interpretations

The mother’s skeletal remains are among those from Catoctin that are currently part of the Physical Anthropology collections of the Smithsonian’s National Museum of Natural History. She is part of a study that is examining the ancestral origins of 27 individuals whose remains were found in the Catoctin Furnace cemetery. Ancient DNA extracted from bone or tooth samples has been collected and processed by the Reich Laboratory of Medical and Population Genetics at Harvard University. Recent joint research with the Harvard lab has yielded positive results from other historic and prehistoric human remains. Ancient DNA analysis using full genome/nucleotide data is assisting in determining the ancestral origins of these individuals and their relatedness to one another. In the future, attempts will also be made to determine the relationship of these historic remains with living populations.

Ongoing research has been funded in part by a Maryland Heritage Areas Authority Non-Capital Grant awarded to the Catoctin Furnace Historical Society. The goal is to provide data-grounded interpretations for public presentation that include the formerly ignored contributions of historical African American residents of the Catoctin Furnace, and that more vigorously invite the active participation of the current African American community in the region and beyond.

It is hoped that identity by descent (IBD) analysis will assist in the production of a more inclusive narrative and become a unique and important aspect of the interpretation at Catoctin Furnace. It may also become a template for new methods of engagement, forming heritage links and restoring identity to people and place through actual kinship as well as collective kinship. This undertaking supports and enhances ongoing attempts to disseminate a narrative that includes the valuable contribution of Africans and African Americans to the United States as well as an understanding of the tragedy of slavery and the legacies of slavery still manifest in economic and social inequality.