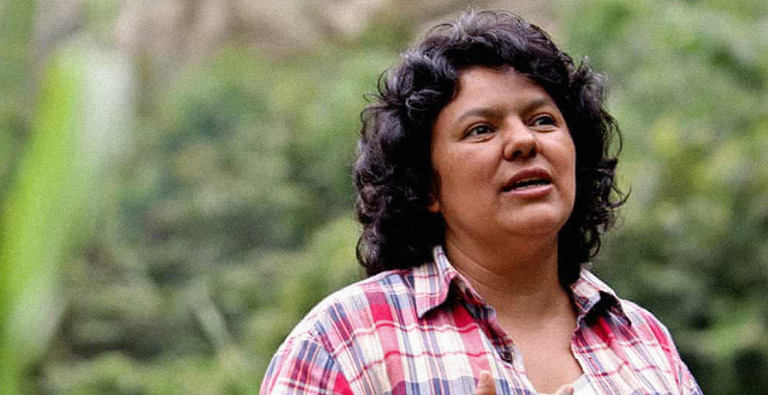 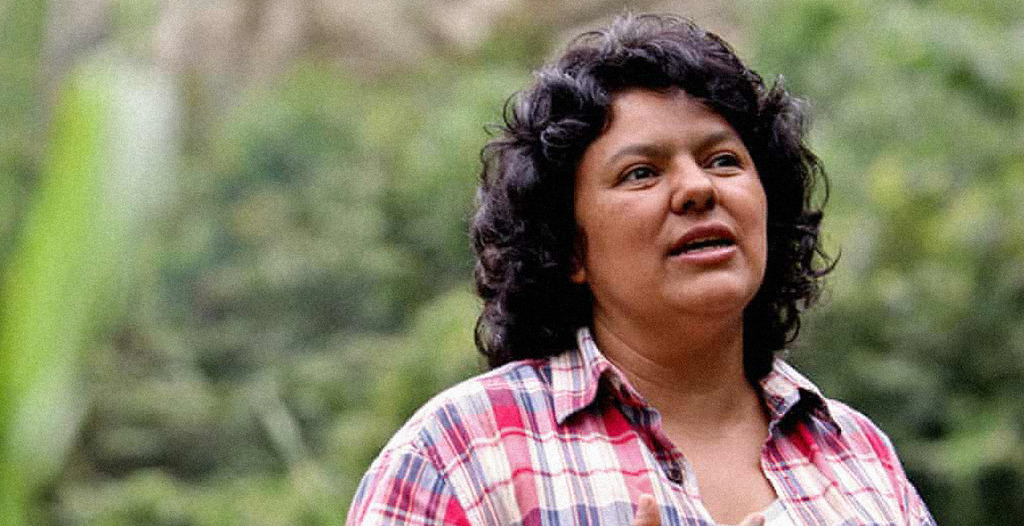 No clear information, although it is said that she became a student leader during her adolescence.

In her struggle against the development of the Agua Zarca Dam, Berta was assassinated by Honduran government-backed death squads on March 3, 2016. Her murder remains uninvestigated. March 2nd, 2016. La Esperanza, Intibucá, Honduras.

No clear information, although it is said that she became a student leader during her adolescence.

No records of personal affiliation to a particular religion, but firmly believed in the rights of the Pachamama or Mother Earth. The native religion of the Lenca community has historically been polytheism from an animist point of view. Practices include nahualism and deities are organized hierarchically. Shamanism is reduced and shamans are usually women.

She was born in a leftist household, where most of her family members had been apprehended, harassed, threatened and even tortured by the police. Her mother had been an activist and so had her brothers. Her activism was a longstanding tradition in her life. She joined other students to organize protests early in her life. Despite the numerous threats she received, she formed different organizations to denounce the corruption of the Honduran government and its alliance with transnational extractivist companies in the Lenca territory.

Berta Isabel Cáceres Flores was a Honduran activist against capitalist neo extractivism and a Lenca indigenous leader. Born in a leftist household, she became a student leader and supported the Salvadoran revolution. Cáceres dedicated her life to fight for indigenous peoples’ control over their territories; women’s and LGBTQ rights; radical democracy; the well-being of Pachamama and against the advancement of transnational capital.

In 1993, Berta co founded the Civic Council of Popular and Indigenous Organizations of Honduras (COPINH) to reclaim ancestral lands and oppose the installation of extractive activities, such as dams, logging operations and mining exploration. In 1999 she co founded the Convergence of Movements of the Peoples of the Americas (COMPA).

Before her murder, she was a very prominent and fierce political activist in Honduras. She led protests against the dictatorship of Manuel Zelaya in 2009 and had a longstanding career as activist against transnational capitalism and rights of nature.

She led the opposition to the project to install a hydroelectric plant in Agua Zarca in 2006 and brought the case to the Interamerican Commission on Human Rights.

In 2015, Berta received the Goldman Prize.

Berta systematically spoke out about the harassment and the persecution to indigenous tribes and the theft of their ancestral lands from the government and the selling of these lands and its natural resources to international companies.

She presented numerous claims in the judiciary against concessions illegitimately given to these companies and demanded that indigenous peoples were consulted on the destination of the ancestral lands.

Members of the organization where Caceres took part have claimed that local and national governments have resorted to counterinsurgency, false claims and trials, judicial persecution, violence and use of bounty-hunters to prevent her claims from becoming public.  In July 2021, a former director of the hydroelectric company Empresa Desarrollos Energéticos S.A (DESA) was convicted as a co-intellectual author of the murder. He is the eighth person found guilty in the investigation.

Transcript of the veredict where Castillo was found guilty of her murder https://www.observacionbertacaceres.org/post/transcriprici%C3%B3n-de-fallo-del-juicio-contra-david-castillo-por-asesinato-de-berta-c%C3%A1ceres#:~:text=El%20lunes%205%20de%20julio,del%20Pueblo%20Lenca%20Berta%20C%C3%A1ceres.