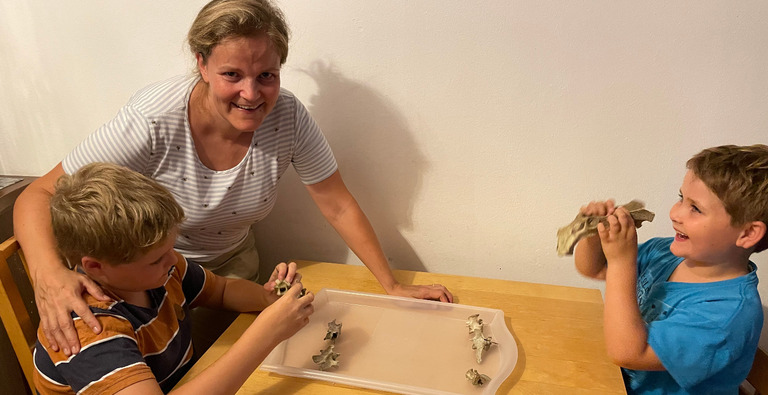 In uncovering stories of the female past, new scientific techniques have a decisive role to play. For most of human prehistory—about three million years ago to only a few thousand years before our present—there are no written records for us to consult. All there is for prehistorians to build on are human remains, artifacts, used objects, and the archaeological contexts in which we find them.

To try and understand the deep human past, I believe it is useful to start with human experience in the present and work from there to ask eye-opening questions. The next step is to go out and find new angles to investigate a question and use innovative approaches as well as scientific techniques and methods that may help answer them. However, we often remain completely in the dark.

We barely know when people started to use language, which makes us wonder—what stories did they tell? What jokes did they make sitting around the fire? How did they express affection and love, given that things seemingly universal as kissing are in fact cultural practices?

As an academic and prehistoric archaeologist, I found becoming a mother overwhelming. The intense bodily experience of pregnancy, birth, and breastfeeding left a lasting sense of identity change. I lost myself as an individual somehow and became somebody else—a mother. Motherhood is a relational concept. It emerges from the evolving relationship between the woman and her children. The individual I used to be ceased to exist and became a distant memory. Instead, a new relational identity was born; a different way to live my life, with different thoughts, preferences, and different priorities.

Starting from this personal experience, I wanted to explore motherhood in the past. How would prehistoric women have felt about this identity change? How would their communities and societies have reacted to this change? I decided to ask some basic questions: How old were mothers when they had their first children? How many children would mothers typically have? Did all women in a community become mothers? Was death in childbirth common? How long did women breastfeed, and did community members other than the mother contribute to raising babies? Did all mothers love their children? Or was neglect, infanticide, and abuse part of the picture?

Simon looking at the pelvic girdle of a deer | photo credit: Katharina Rebay-Salisbury

For prehistoric societies—and I am particularly interested in Bronze and Iron Age central European communities (c. 2200-0 BC)—there is no place where one can look up the answers. But there are many archaeological relics.

Life experiences are literally inscribed in bones and teeth. The human skeleton is not an unchangeable scaffold but responds dynamically to internal and external forces. It modifies and responds to diet and environmental conditions, habitual practices, disease, and trauma.

Poor diet in childhood and childhood diseases, for example, may lead to stunted growth and interruptions in the growth of dental enamel visible as hypoplasia lines. Fractures and injuries heal as callus forms and bones remodel, but the repair tissue can usually be identified in skeletons recovered from archaeological contexts thousands of years after the accident or assault. The geological signatures of the bedrock on which people’s diet is grown becomes part of the chemical makeup of bones and teeth and can be used to understand people’s geographic origin and movements. We can trace a person’s movement across space and time by analyzing different body tissues.

Skeletal bodies usually differ enough to allow the identification of the sex of buried persons. After all, women’s bodies have evolved to allow childbirth. In some cases, however, the shape of the bones is ambiguous and an osteological assessment may not be sufficient. Any population would have included variability, e.g., smaller men with feminine features and more robust, taller women. In recent years, ancient DNA analysis has contributed much to identifying men, women, and intersex persons in the archaeological record. Even small bits of proteins that are involved in building dental enamel are expressed in male and female specific form, and today, we can use mass spectrometry to detect these dimorphic peptides.

We can read a person’s chromosomal sex thousands of years after their death, and yet, we do not know if this aligned with how they identified or lived their gender. To uncover female prehistory, we have used data on sex as a proxy for gender, assuming that sex and gender mapped neatly onto each other. However, we can question if this is a reasonable or ethical approach. The definition of sex and gender remain fluid within our own society, but DNA - life’s blueprint crucial for our being and reproduction - is not a matter of definition and interpretation, it is a fact.

In my quest to understand motherhood in prehistory, I searched for methods to find mothers in the archaeological record. Women buried with a fetus in their pelvic area are rare—much rarer than one would expect—given that birth complications such as placenta previa or preeclampsia must have been deadly as prehistoric people were not in a position to do anything about these conditions. We reckon that at least about a tenth of the female population died of pregnancy and birth related causes. Even for the mothers that lived, birth injuries may have been common. The strain of pregnancy and births may also leave traces in the female pelvic bone as the cartilage, tendons, and ligament connections between the pelvic bones need to relax and open up to let the baby’s head through. Sometimes, bits and pieces of bones break off and are re-modeled, leaving grooves and scars that we can analyze thousands of years later.

Is it even ethical to use the remains of women to understand our own female history? The Bronze Age case studies I investigate are from the region I live in, and there are no specific links between the prehistoric people and our communities today. We know nothing about their religion and beliefs. We know they were not Christians because it would be another two-thousand years before the birth of Christ. We do not know if they would have any problems with our scientific approach of analyzing their bones to learn about them. I personally believe they would have liked it. Contemporaneous Egyptians did everything to preserve the dead: they were dressed up and displayed, not only for the gods in the afterlife, but also for their community to admire and honor them. Bronze Age people put a lot of effort in preserving and burying the bodies of their dead, revisiting and sometimes re-arranging the bones after decomposition.

As a prehistorian, I love my research. It is an exciting time to do archaeology with an ever-expanding toolkit to apply to interesting case studies. Understanding the past is a quest for finding methods that shed a spotlight into the darkness. Each woman we study closely reveals an aspect of the female past. Even if these are only single spotlights in time and space, many of them will come together to paint a vivid picture of prehistory. Patterns of how women lived their lives will come together, and tell us about gender relations and power structures of the past and how they developed. Together, they will write a New Historia.

Katharina Rebay-Salisbury is a prehistoric archaeologist with a research focus on the European Bronze and Iron Ages. She directs the research group ‘Prehistoric Identities’ at the Austrian Archaeological Institute. In 2015, she was awarded the ERC Starting Grant for her project, “The Value of Mothers to Society: Responses to Motherhood and Child-Rearing Practices in Prehistoric Europe.” Her current project investigates gendered mobility and temporality at Late Bronze Age cemeteries in Austria and contributes to improving the bio-archaeological investigation of cremated human remains.